from Where Darkness Dwells by Scimitar 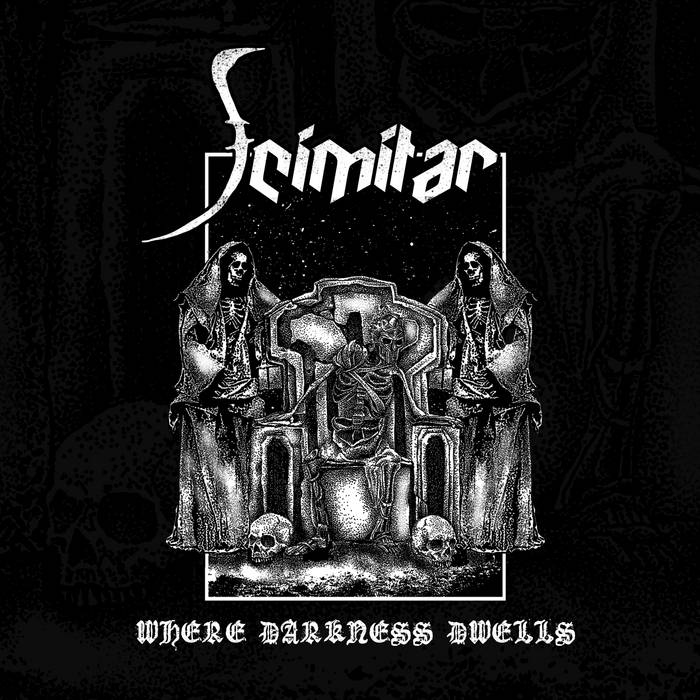 Track (06) of the Scimitar - 'Where Darkness Dwells' debut album.

Here he stands, with his hammer in hand
Creating our tools of death
Fire ablaze, In Ares we praise
Black metal made for war
Visiting from all around to see
Trying to get his steel
Evil cursed blades, that runs the field
Death from all around

Known for fluxing
Eight blades strong
Unlocking the secrets within
Minotaur slayed we take this day
Blades drenched in your sin
Another quest unfolds again
The hordes of death will reign
Shattered skies, Earth demise
Blood was spilled this night

On his way, his quest for steel
Lurking in the dead of night
Upon a yurt he sees a light
He enters at his will
A figure stands, black as night
Eyes filled up with rage.
Muscled and bound, he steps forward
Holding two curved blades.

Saladin, he scourages the land to find
What is rightfully his
He is hidden within the desert
The Unholy Forger
Unholy Forger, he is the one
Sadistic torture, let judgement be done

Unholy Forger, he is the one
Sadistic torture, let judgement be done

from Where Darkness Dwells, released August 27, 2017
All songs (excluding cover) written and recorded by Scimitar at The Mill.
Engineered & Produced by John Thompson © Copyright Scimitar 2017. All Rights Reserved.

Scimitar are a Thrash Metal band from Belfast, N. Ireland formed in 2011. The band wrote music for around a year, before performing their live debut in June 2012 in The Warzone Centre. Since then our fans' reaction and support has been overwhelming; we received an amazing response from the local Belfast Metal scene and shared our music with local and touring bands in the UK and Ireland. ... more

Bandcamp Daily  your guide to the world of Bandcamp